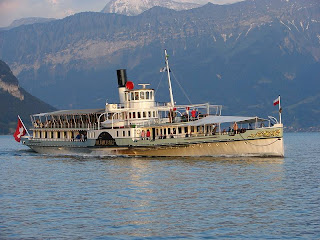 DS Blümlisalp on the Lake of Thun

This blog is dedicated to a very special paddle steamer the DS Blümlisalp which was built in 1906 and was in operation on the lake of Thun until 1971 when the BLS company decided a paddle steamer did no longer fit their image and moved it into a disused quarry on the lake, with the hope that it would rust and gradually sink to the bottom. This outraged the people around the lake and they began a long fight to have their beloved paddle steamer back in service. 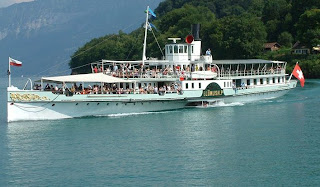 The Blümlisalp in it's glory
The paddle steamer DS Blümlisalp was built in 1906 by Escher-Wyss in Zürich, especially to operate on the lake of Thun in Switzerland. Other lakes also had their own paddle steamers. On the 1st August 1972, the DS Blümlisalp completed her last cruise as the owners BLS had decided to replace the paddle steamer with a more modern Salon cruiser which it named MS Blümlisalp. This new ship was taken into operation by BLS in 1972 as well. The action of the BLS created outrage among the local people around the lake. Newspapers and Radio stations were inundated with readers and listeners complaints. However the BLS board was unrelenting. After a couple of years pleading by the friends of the Blümlisalp, the ship is towed to its final resting place in a disused quarry in a hope that it would rust and sink to the bottom. 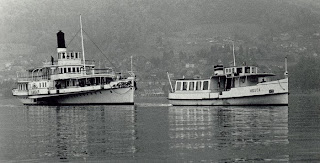 The DS Blümlisalp is towed to it's final resting Place


The friends of the Blümlisalp were worried that vandals or even saboteurs could damage their beloved paddle steamer. They organised night and weekend watches with 2 people sleeping in sleeping bags on board every night. More and more people joined the group and working bees were organised to maintain the boat. 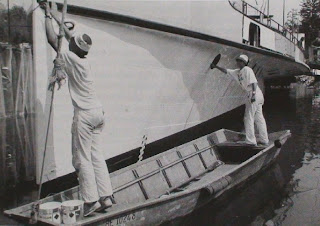 Any rust was quickly removed and re-primed and painted windows were covered with plywood and a group of enthusiastic engineers kept the engines greased and spotless. In other words, the DS Blümlisalp would not die. Complaints to the authorities that unauthorised people were frequently visiting the ship was dismissed by the authorities after all law enforcement officers were also among the friends of the ship. On the 10th anniversary of the ship’s exile was featured in articles in the Swiss press. The BLS eventually relented and handed ownership of the wreck to the friends of the Blümlisalp. A people’s initiative demanded the Canton’s government step in and provide the funds for the restoration of the boat to an end that it could once again be put in service. The “yes” vote was overwhelming and the government commissioned the renovation and modernisation of the boat. 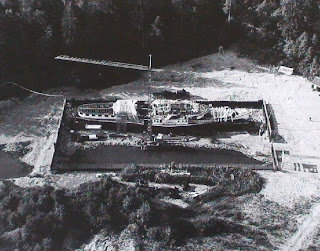 Restaurations on the "doomed" vessel

May 1992, the renovations were completed and the DS Blümlisalp was once again a proud member of the Lake of Thun fleet. Never before in the history of Swiss Paddle steamers had so many people fought for so long and so hard to keep a beloved paddle steamer in service. 21 years they fought and finally it paid off. 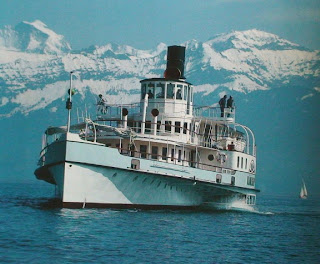 The DS Blümlisalp is back in service
Blümlisalp - The Movie
Posted by wilbo43 at 1:53 AM 4 comments:

wilbo43
I am an occasional blogger, retired and generally enjoying life. Thanks for stopping by. Your comments are very much appreciated!